We started from the Hamburg lot as usual, heading down south to Gambrill. The weather was nice with temperature at upper 50s. I felt the pace was quicker especially after we arrived at Gambrill. Mark and Jack was pressing ahead strong. I managed to drag myself along and stayed with the crew. Soon we got down to the lower lot via the trail by the tea room. From there, it was a big climb up. After cleared the step-up by the tree towards the end of the climb, I was exhausted and my legs refused to pedal hard. On the way back, I hanged on in the back, stopped a few times to take video/photo shots of the guys riding TTF. 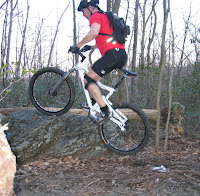 On the last climb in Gambrill to the cell tower, I was feeling tired and really pushing myself to keep pedaling. Interestingly my legs were never cramped. Back to the parking lot, 13+ miles were logged in and I actually liked the ride, though the second half was in a way suffering.
Mark playing on TTF.