I had been having this rear brake vibrating issue for quite a while. Basically when I pulled the lever, the entire bike vibrated violently and emitted high pitch noises like a semi truck stopping in a hurry. I tried organic pads, anti-squeeling compound, multiple bleedings, filing pads, nothing worked.

Finally I couldn't take it any more and got a new set of brakes (Avid Elixir CR) to replace the Juicy 7, hoping the issue was associated with the Juicy, which has a reputation of being loud. New brakes installed, I rode it around the block and the brake was silent. "Great!" I thought.

After shortening the cables I took it to Schaeffer for a spin. BTW, the temperature outside was in triple digit, the two bottles I bought with me lasted only a little over an hour. Anyway, on a fast section, I applied the brake, the vibration came back, and stayed.

I sat in the garage carefully inspect the whole set up. The nice thing about the Elixir vs. Juicy was the top loading pads, which allowed to check the pad/rotor alignment. What I found was that the back side of the caliper was elevated a little too much so the pads were not fully engaging the rotor. Easy enough to fix. I put two 1-mm Ti washers in place of the original adjusting washers to lower the caliper. Tightened everything and gave it another spin - dead silent with tremendous stopping power. Problem solved.

A trial ride on the course trailhead to trailhead took 51:41, SS 32x16. The course minimizes the climbing thus a geared hardtail would be the best for time trial. Expect to see someone posting sub-40.

BTW, I plan to be a spectator of this race.
Posted by YUEQ at 2:37 PM No comments:

May not be the best idea to have white saddle and grips on a mountain bike, but I like it. 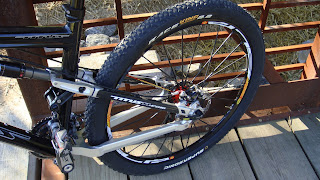