US Olympic Cyclists in Beijing The latest Dirtrag magazine (issue 138) had a article by Adam Craig, member of the US Olympic Mountain Bike Team, talking about his experience in the Beijing 2008 Games. On the training and air quality, he wrote:

"The overall "Games Experience" was pretty awesome though...if a bit hard to soak in during the four short days we spent in the village. We agreed, as the U.S. Mountain Bike Team, to train in Korea to avoid the possibility of challenging training conditions and poor air quality in Beijing. Turns out that, through a combination of aggressive pollutant control and natural rainfall, the air was fine. And Mike Broderick found some good riding in the "Fragrant Hills" just west of the city, so we could realistically have just come to the Olympic Village a week out and done our prep there."

Earlier before the Games, some of the US Olympic Cyclists arrived Beijing Airport wearing masks, and then quickly apologized to the host country.

There was a new twist developed: the masked cyclists wanted an apology from USOC.

Saw one in the group ride in Little Bennett today. The brownish snake was laying in the middle of the Kingsley road, steady like a sculpture. While we were debating whether or not it was dead, I threw a small stone at it. Sure enough the head moved a little. The poor ectothermal guy was probably too cold to move, and might have to stay there till sunrise tomorrow.

No picture was taken.

Second venomous snake in a week.
Posted by YUEQ at 11:11 PM 3 comments:

First time ever in my life saw a rattlesnake in the wild!

The snake had beautiful green patterns, small head, huge mid-section, and dark rattler. It was right in the middle of the trail, stretched and enjoying the sunshine. There was no way around it so Edward and I decided to persuade it off the trail. We tried throwing sticks at it but the rattler headed towards us instead. Quite intimidating. Finally Edward poked it with a 15-foot stick a few times and got it slithered off the trail.

The beautiful creature was spotted near Salamander Rock, about half way into the 25-mile ride.
Posted by YUEQ at 7:43 PM 2 comments:

Today I rode 14+ miles in the Shed with the adjusted cleats and pedaling style. No issue with the knee. Hopefully I found the solution.

GPS trace
Posted by YUEQ at 3:38 PM No comments:

I did a roughly 16 mile shed ride with friends today and alarmingly, in the last quarter the familiar knee pain came back! A quick research on the internet I found this wikipedia entry:

Iliotibial Band Syndrome symptoms range from a stinging sensation just above the knee joint (on the outside of the knee or along the entire length of the iliotibial band) to swelling or thickening of the tissue at the point where the band moves over the femur. The pain may not occur immediately during activity, but may intensify over time, especially as the foot strikes the ground. Pain might persist after activity. Pain may also be present below the knee, where the ITB actually attaches to the tibia.

Yes, those are the symptoms I'm suffering right now. The wiki then says:

Uh, that doesn't sound good. And it goes on:

...
* In cycling, having the feet "toed-in" to an excessive angle

um, that could very well be the reason. I'll try to change the cleats position a little and pay attention not to toe in too much.

Anyway I hope this is not the end of riding.

BTW, Both Rob (last time) and Dan (today) mentioned to me it could be the Iliotibial Band Syndrome. I believe they were right.
Posted by YUEQ at 10:41 PM 1 comment: 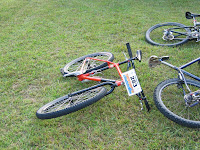 Only four days passed but I feel the race was like long time ago. The experience was great yet literally painful.

06:30am the race started on time. Hundreds of riders filed through the campground exit. I was in the back letting the racer boys/girls go first. The section to the first Aid Station was mostly easy climbs on double track/fire road. There was one very short stretch of technical climb on singletrack that I hiked because I didn't want to push myself much. AS1 came and went, nobody stopped, time was about 07:47am. Denis was long gone. I didn't know that until AS5.

Then it came the long hike-a-bike section. I dismounted early and didn't even bother to hop back on - everybody in front and behind me were walking. It felt like a never ending hiking. Towards the end of the hike, my right knee, near the top of tibia, started to hurt a little. I had a brief couple minutes stop at AS2 (10:10am) and rode on. At that time, I was on an under 12 hours pace . I felt pretty well, legs still fresh. However it didn't last for long.

The knee pain really kicked in after finishing the long climbing to AS3. The subsequent long downhill didn't help much. I had to stop on the downhill several times just to allow my arms and wrists to relax. Liz passed me there and I never saw her again.

At AS3 (~12:10pm), I took a longer break, ate some PBJ and banana, and gave that knee a few minutes to rest. On my way out of the station, there were quite a few riders on the other side of the road riding opposite direction - they all had already gone through AS4. Good for them!

AS3 to AS4 turned out to be a nightmare for me. I was struggling to inch ahead because the knee pain was killing me. Even walking would trigger the hurting so I had to stop frequently. Many riders including Tim passed me on the downhill section to AS4. I came to a very small stream crossing, only to realize that I wasn't able to power the bike through. I dismounted, hesitated, calculated the best line to limp over. Down and frustrated, I told myself to quit at AS4.

2:30pm I found myself rolled into the AS4. I threw down the bike and went for some PBJ and banana. After a little rest, the knee seemed to be a lot better, even to the point that finishing the race was more tempting. Overheard that AS4 to 5 it was a long steady low grade road/fire road climb, I decided to move on. That section wasn't too bad. I went slow but steady, even passed a few casual pace riders on the climbs. Nearly three hours later, I made it to the AS5 before the cut off time. The time lady told me Chris had not yet checked in, but Denis did long time ago. I was a little worried about Chris. It made perfect sense if he had dropped. After all he hadn't really trained before the race.

Then, right before I was about to roll out, Chris showed up. A brief rest later we headed out together for AS6. We grouped with Tommy, who we met at dinner table the evening before. We climbed, we paused. Most of the time Chris would pull ahead and wait. Still bothered by the knee pain, I was so happy when finally reached the 4,300 ft apex. On the descent it was getting dark. I bombed down some technical sections that my conscience would stop me if there was better lighting. The first sweeper caught us. Time was running out.

Later Chris had a mischief falling into the creek in the dark. AS6 seemed so far away...
I had more PBJ and banana at AS6. From there to the campground was 12 miles. I was able to do most of the climbs. The singletrack downhill still got me and I had to stop and rest my arms once in a while. At the finishline, I was greeted by Denis and Tim, shook Bob's hand with wet glove on, and found myself eating Scud fries out of Todd's plate :) While gobbling down some hotdogs and burgers, I saw Tommy walked in with a glass in hand - he got his priority absolutely right. After dinner I packed up and drove home, planning on next year's return.

The aid stations were great. In fact, next time I race this I'll not carry my Camelbak - simply no need.

I checked in this Motel the night before the race. No thrilled. I didn't mind the sticky night table, half broken bathroom fan, challenging sink faucet, not even the high decibel window AC. What got me was the smell of the smoking room... The entire building was like that so I doubt a non-smoking room would be any different. The shower was good, though. 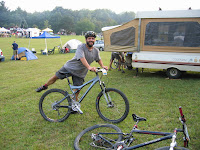 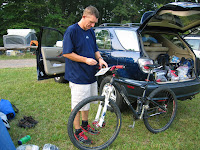 Denis making a fashion statement by mounting the number plate on the brake cables. XD 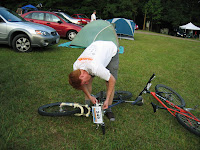 Chris Getting ready for the race. 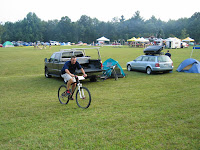