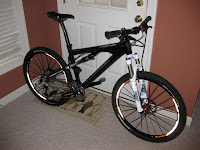 The bike was built for the two races I plan to do this year: Leesburg Bakers Dozen and SM100, both I did on SS last year. The frame is a 2008 Racer X carbon that I bought off Chainlove. 2425 grams actual weight on my digital scale. The carbon front was about twice as thick as my other bikes', definitely an over-engineering IMO. The frame was finished fairly well in the factory - especially the rear triangle. The front could use a little more attention, though. For example, the head tube top and bottom were not as smooth as one would expect. I even thought about how to face them. 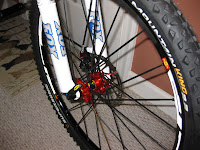 Chris King and CrossMax SLR were the two top choices I had. I love King's durability and engagement. Mavic factory wheel's stiffness and light weight also make perfect sense for the bike. In the end, I found a set of SLR wheels for about half off MSRP, so here they are.

The Fox fork was originally bought for the Seven but did fit. Perfect for the X!

Elixir CR - never had any experience with the brake. Guess I will find out. The G3 rotor looks pretty cool. 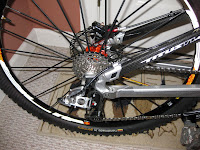 Originally I had the idea of using road RD and cassette. I thought the SRAM road rear derailleur should work with XO shifter since they both are claimed to be 1:1 - wrong! The 10 speed SRAM FORCE RD finished the whole 9-spd travel in 7 clicks on the XO :( . Replaced it with a long cage XO and it works like a charm. The Dura Ace 9-spd derailleur is a gem, 176 g, 12-27t. 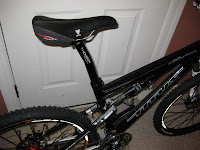 Thomson Masterpiece seatpost shaved away Thomson's signature oval shape internal to save some 100 grams weight. Hopefully it will hold up.

I had to replace BB bearings that came with the Race Face Deus crankset, because the plastic shim was pushed out and broken during the install. No problem, I have all the tools and a Enduro upgrade kit handy, and the job was done in less than 5 minutes. The Under Belly Plate
is certainly unique, not sure how useful it is, though.

The two Continental Mountain King 2.2 Supersonic tires are about 980 g - another way to cut some weight. The actual tire width is slightly under 2.05 (claimed to be 2.2). These are so far the narrowest and lightest tires I used.

Can't wait to get out and give it a spin - but it's raining outside. Looks like I may have to wait till the week of LBD to find out how it rides.