Winter Is Over, Finally!

It was 70+ degree today after a major snow storm just the past Monday. Bunch of us scheduled a ride in the Shed, fully prepared to bail if the trails were bad.

When I arrived at Hamburg, there was standing water in the parking lot. I quickly scanned the trailheads. Both sides (north and south) were actually dry, not even damp. While I was changing, a group of guys came back from their ride and reported the trails were not as wet as they had thought. Their bikes were pretty clean, no signs for a muddy ride. Good! 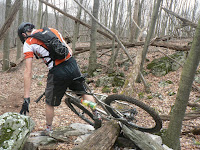 Denis and I did the little twisty trail off Hamburg north. That section was 95% dry and 5% damp. No muddy area. We came back on the road to meet up with Brian and Marco in the parking lot. Then set off south, took the fire road up to VW trail, and did the twisty trail backwards. Brian peered off at that point. Denis, Marco, and I pressed on and completed the rest of the ride. We went through Enchanted Forest, Little Canaan, FCR to Salamander, Viper and Pit, then came back on the ridge to Thurmon Overlook, climbed up the Blue, went down Death March, and took FCR back to the parking lot. The entire route was pretty much dry, except for a few areas on the Blue to Death March. The soft ground there almost gave me a cramp, which I haven't had for a few years. Luckily that part of the trail was wide enough for us to pick relatively good lines.
I was really glad that Frederick held up to its reputation. 20 miles ride in shorts and ss jersey felt really good after a long winter.

Photo 1: Marco climbed up the Blue
Photo 2: Me stuck on a log (photo credit Denis)