Before the race my goals were to beat the lights cutoff (I didn't pack lights), and finish safely (Shed ride on Wednesday). I managed the first one but failed the second.

For me it was a little too cold in the morning. It began to warm up on the first fire road climb though I could feel my legs were still cold. I was riding with Denis briefly and then dropped to my own pace. I pushed myself to do most of the donkey line ups except for a few really steep sections. Near the top I paid for that with my first cramp in years. I had to sit down for a while and cheering people passing by.

It wasn't too bad I said to myself because at that point I still had plenty of time to beat the lights cutoff. I noticed I hadn't drunk much Gatorade because of the cool weather, but I might have lost electrolytes during the long climb. I had a few more cramps later on but I was able to ride them out.

Later on the descend I had my first flat. No big deal that was spare tube and CO2 for. I got another spare tire at CP2.

Climb to Checkpoint 3 was slower than I would like, but I managed. 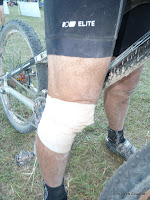 The climb after CP3 went well. I was leading a pack going up the hill. At the top I told people the downhill to CP4 was an easy one. Well, it was, but I failed (or my bike failed me). In the middle of one off-camber rocky section I tried to down shift to go through. The chain dropped. My legs made several desperate turns before the whole thing came down to the rocks below the trail. The bike fell on me and it was fine with only some very minor cut on the saddle. The rider's right knee was not so lucky. A deep cut about inch and half wide couldn't keep the blood from leaking out. I didn't know what to do but I do know I wouldn't be able to ride like that without stopping the bleeding. None of the riders going by had first aid kit.

Just at that time a miracle happened. A hiker with a huge backpack showed up on the trail. He helped me to put a sterile pad on and fixed it with some tapes. I thanked him and went on with the race. I caught up a tandem and we exchange the lead several times.

I rolled into CP4 miserably. It wasn't bleeding any more so I kept going.

On the way to CP5, I pulled a pack of riders on the initial relatively flat section. But once it got steeper they all dropped me in the dust. I went on the death climb solo all alone by my self. The tapes started to come loose and flying in the dusty wind. I stopped a few times to rest my legs and to digest the misery.

At CP5 a nurse looked at my wound and put some good bandage on. It was a well done job because I didn't feel any restrain later on in the ride. Many thanks to her. I left CP5 30 minutes before the lights cutoff. Somehow I got a second wind and passed a lot people including the tandem on the 13-meadows climb. I reached the top first in the group, only to be caught by many of them on the downhill because I was so afraid of having another crash.

I spent about only 20 seconds at CP6 gobbled down some bananas. I was feeling strong and did the last climb in the middle ring. I was again ahead of the tandem. We cheered on each other when I rode by them.

Just after all the climb and not long into the sweet descend to the finish line, another flat sent me to the trail side. "Oh that's a rip off", the tandem guys flew by me. The spare tire I got at CP2 had a short valve stem, so short it couldn't set off the Air Chuck SL CO2! Not sure why people make such a thing, aerodynamic? weight saving?

I passed a few more before the finish, but couldn't catch the tandem. The time on my GPS was just under 12 hours and 24 minutes. Jamie (Batbayar) poured me a cup of DFH.

Bandage picture by Denis; Wolf Ridge and finish line pictures by Bob's Photo Gallery.
Posted by YUEQ at 11:31 AM